Aim: The application of cone-beam computed tomography (CBCT) in the management of calcified root canal system.

Background and objectives: Dental trauma to the permanent dentition can lead to various clinical complications and its management may be considerably challenging for a dental clinician. One such complication is intracanal obliteration. Root canal calcification occurs commonly following traumatic injuries to permanent teeth in approximately 4–24% of cases which is characterized by the apparent loss of the pulp space radiographically and discoloration of the clinical crown. These teeth provide an endodontic treatment challenge in locating the root canal orifice and negotiating the canal to its full working length. Iatrogenic errors such as instrument separation and root perforation are more prone to occur in such cases.

Case description: Two patients were reported to the department with the chief complaint of discolored teeth in the upper front tooth region. On radiographic examination, pulp canal obliteration (PCO) was identified and the two cases were managed successfully with the help of CBCT.

Conclusion: With the application of CBCT as a guide, it is helpful in orienting the burs angulation within the pulp chamber with fewer chances of iatrogenic injury.

Clinical significance: Cone-beam computed tomography (CBCT) is considered the third eye of an endodontist which provides images in sliced sections in all the three planes without overlapping the adjacent structures and it facilitates the identification of the canal orifices, canal directions, degrees of obstruction, and also their dimensions.

The success of endodontic treatment depends on adequate access cavity preparation, locating the root canal orifice, negotiating the canal till minor constriction, proper working length determination, cleaning, and shaping followed by complete obturation of the root canal system. The procedure of locating the canal orifice is sometimes complicated by root canal calcification. Root canal calcification usually occurs secondary to trauma in 40% of cases,1–3 as a result of carious lesion, regressive alterations of the teeth, and orthodontic treatment.4 It also occurs in geriatric patients due to the formation of secondary or tertiary dentin on aging.5,6 These calcific deposits present in the pulp chamber cause the tooth to appear with a darker hue, loss in translucency, and more yellowish in color.

A calcified root canal may present challenges to the dental clinician in locating the canal orifice and negotiating it completely to the full working length. An effort to locate and negotiate the calcified canal may remove a large amount of tooth structure increasing the risk of perforation or fracture of the root. The presence of calcification may hinder the adequate cleaning and shaping of the root canal system which in turn leads to failure of the endodontic treatment.

There are so many advancements available at present at the hands of endodontists for managing the tooth with calcified canals. One such advancement is CBCT. Cone-beam computed tomography (CBCT) is considered as a third eye of an endodontist which provides images in sliced sections in all the three planes7,8 without overlapping the adjacent structures and facilitates the identification of the canal orifices, canal directions, degrees of obstruction, and also their dimensions.9–14

This case report highlights two such cases with calcified canals which were managed successfully by CBCT evaluation.

A 35-year-old female patient visited the Department of Conservative Dentistry and Endodontics at Rajas Dental College and Hospital with the chief complaint of darkening of the tooth in the upper front region of the jaw for the past 6 months. The patient gave a history of fall involving trauma to the upper front tooth region of the jaw before 5 years. Past dental history revealed a previous attempt of root canal treatment in the specified tooth before 2 weeks which could not be completed due to difficulty in canal orifice location. Medical history was noncontributory.

On intraoral examination, the upper left central incisor (21) was discolored with no tenderness on percussion and no swelling or sinus tract. Thermal and electric pulp testing showed a negative response when compared to the control tooth. A periapical radiograph of 21 showed a coronal radiolucency involving enamel, dentin, and pulp chamber space (Fig. 1A). The outline of the root canal was not clear on the periapical radiograph which suggested the calcification of the root canal. Based on the clinical examination and radiographical findings, the tooth was diagnosed as previously initiated therapy with asymptomatic apical periodontitis. Therefore, it was decided to treat the teeth endodontically followed by full coverage restoration. After obtaining informed consent from the patient, the treatment procedures were carried out. 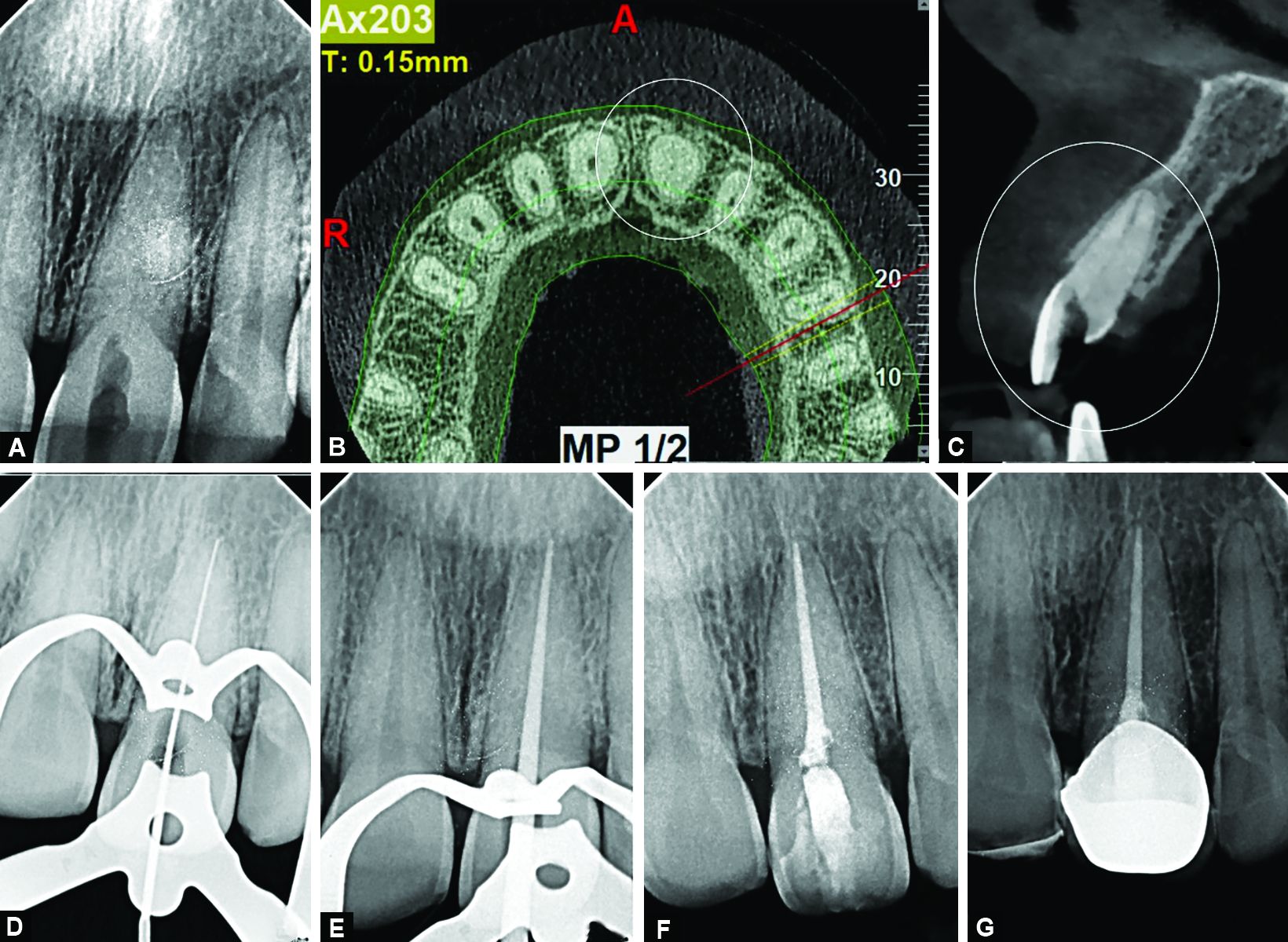 To avoid any perforation, a limited FOV-CBCT was advised in order to further evaluate the morphology of the root canal and also to verify the presence of any root canal.

Slices at the level of the crown showed labially and mesially misaligned access cavity preparation. The canal was not visible till the middle third of the root canal and it was visible in the apical third which was found to be dim when compared to the canals present in the other teeth (Fig. 1B).

The sagittal section showed the labially misaligned access cavity preparation at the crown level and the canal was visible in the apical third (Fig. 1C).

After administration of local anesthesia with 2% lidocaine and 1:80,000 epinephrine and isolation using a rubber dam, the access cavity was well defined which was already extending up to the CEJ level. Based on the CBCT findings, the access cavity preparation was shifted towards the palatal and distal aspects of the crown in order to locate the canal orifice. Once a catch into the canal orifice was achieved, canal negotiation was attempted using #8 K-file and then with #10 C+ files till working length. The canal was progressively enlarged with the hand files to create a glide path. During instrumentation, the files were frequently inspected in order to identify any sign of fatigue, the unwinding of the flutes, or any other similar defects. The working length of the root canal was established using a periapical radiograph (Fig. 1D). Root canal preparation was done with ProTaper Universal instrumentation along with irrigation of 2.5% sodium hypochlorite and 17% ethylenediamine tetra-acetic acid (EDTA). Master cone selected (Fig. 1E). Obturation was done with the single cone technique (Fig. 1F). The direct composite restoration was placed after obturation and full coverage restoration was given (Fig. 1G). A 6-month follow-up radiograph showed complete healing of the periapical lesion and the patient was completely asymptomatic.

A 42-year-old male patient reported to the Department of Conservative Dentistry and Endodontics at Rajas Dental College and Hospital with the chief complaint of discoloration of a tooth in the upper front tooth region of the jaw for the past 2 months. The patient gave a history of trauma involving the upper front region of the jaw before 4 years. No relevant past dental and medical history was reported.

On intraoral examination, the maxillary left central incisor (21) was discolored and it was not tender to percussion. There was no swelling or sinus tract associated with the tooth 21. Pulp sensibility testing showed a negative response. Periapical radiograph revealed a faint radiolucent line suggesting pulp canal obliteration (PCO) and an ill-defined periapical radiolucency with loss of lamina dura and widening of periodontal ligament space (Fig. 2A). Based on the clinical and radiographical findings, the case was diagnosed as pulpal necrosis with asymptomatic apical periodontitis. Therefore, the treatment plan was devised as root canal treatment followed by direct composite veneering. After obtaining the informed consent from the patient, the treatment procedures were further carried out. 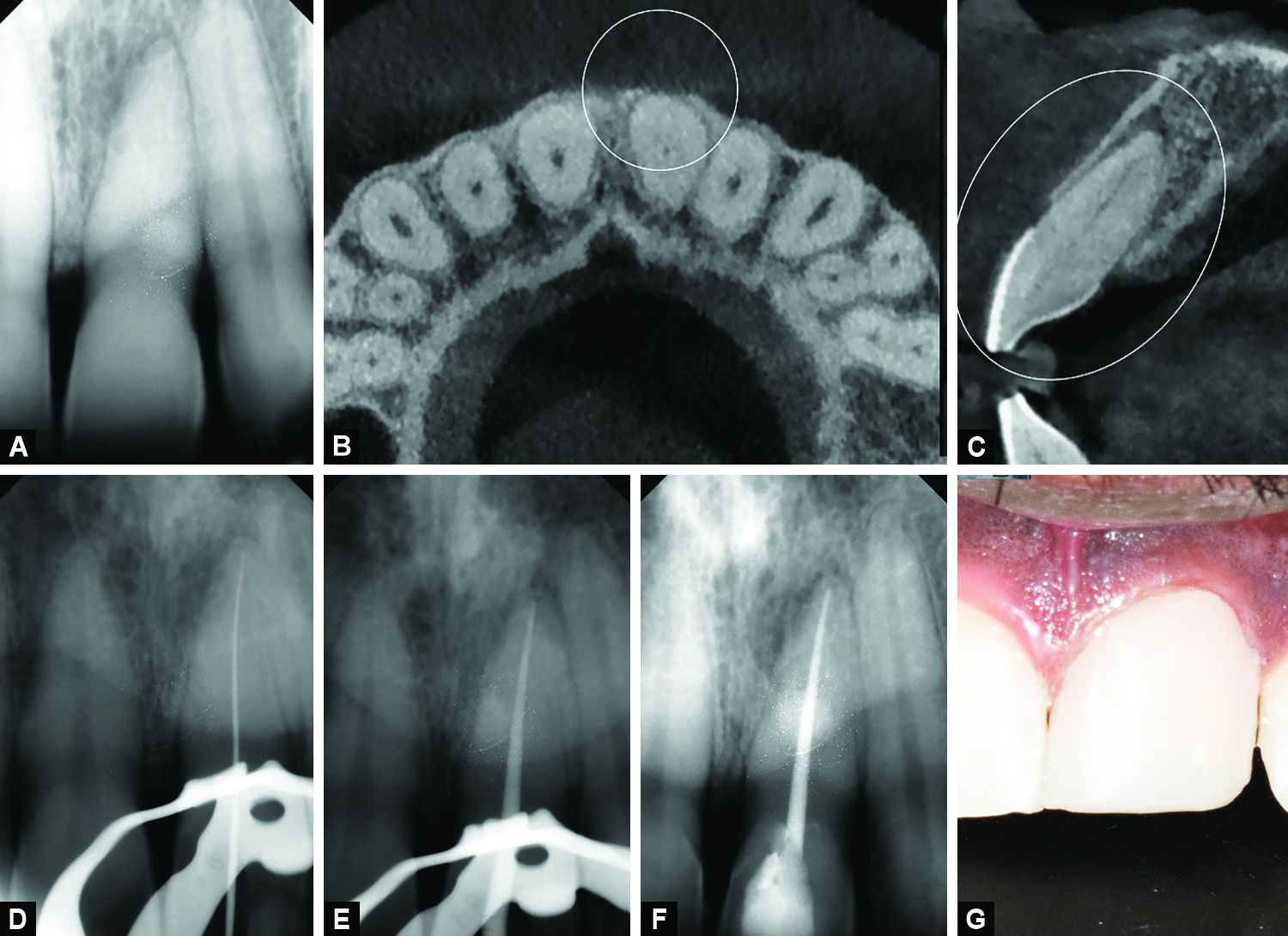 Cone-beam computed tomography (CBCT) was taken to further evaluate the root canal morphology and also to check if there is any presence of root canals.

The sagittal section showed a faint radiolucent line extending from the middle to the apical third of the root (Fig. 2C).

After achieving local anesthesia with 2% lidocaine 1:80,000 epinephrine and rubber dam isolation, the access cavity was prepared with the help of a long neck tapered fissure bur through a palatal approach. Based on the CBCT findings, the access cavity preparation was shifted towards the palatal aspect of the crown to locate the canal. Once the DG-16 endodontic explorer was bound to the root canal orifice, canal negotiation was done using the #10 C+ file as described in the previous case report. Working length was determined using a periapical radiograph (Fig. 2D). Canal preparation was completed with ProTaper Universal instrumentation along with 2.5% sodium hypochlorite and 17% EDTA. Master cone selected (Fig. 2E). Obturation was done with the single cone technique (Fig. 2F). The direct composite restoration was placed after obturation and direct composite veneering was done (Fig. 2G). 6-month follow-up radiography showed complete healing of the periapical radiolucency and the patient was asymptomatic.

Endodontic access to calcified root canals may be a challenging task for dental clinicians as it is associated with many failures such as alterations of root canal geometry, substantial loss of dental hard tissue, perforations of the root, file separation, lodging, and unsuccessful canal negotiation.17

The prevalence of calcification is found to be higher in anterior teeth of adults18 especially in central and lateral incisors. According to Holcomb and Gregory’s study, partial or entire canal calcification prevalence has been reported at 4% for incisors;19 that reaches 22% in permanent teeth which have been traumatized,20 and also the chance of forming a periapical lesion is reported 7–27% for these teeth.21 Yellowish appearance and lack of translucency are common clinical findings related to pulpal calcification.

In these cases, C+ files were used because they were found to have greater buckling resistance when compared with conventional stainless steel K files and that helps in easier negotiation of the calcified canals and gaining access to the apical third. The shaft of the C+ files provides a 300% increase in buckling resistance during the negotiation of the calcified canals. These files have a pyramid-shaped tip which makes insertion easier during instrumentation and also has a square section that allows better resistance to distortion.22

Cone-beam computed tomography (CBCT) is used in these cases for location and identification of the calcified canals as they are proven to be a better radiographic modality when compared to two-dimensional radiography for location and negotiation of calcified root canals. It provides thin slices in the axial, sagittal, and coronal planes of the tooth.7,8

Whenever there is a presence of root canal calcification, the dentists instead of operating blindly can make use of CBCT which will provide clear-cut evidence of the presence or absence of the canal in a three-dimensional view. The successful management of these cases enlightens the importance of CBCT in the management of calcified root canals.