Aim: The aim of the present pilot study was to assess the preoperative cone-beam computed tomography (CBCT) images with prefabricated grids to locate the periapical pathosis in mandibular molars.

Materials and methods: Two adult human cadavers in which mandibular first permanent molars were selected for this study were selected for this study. A stainless-steel grid has been precisely created. To support the grid, it was positioned along the long axis of teeth on the lingual side by using putty material. In both mandibles, Grid-based CBCT planning was used for the experimental group, while nonguided CBCT planning was used for contralateral counterparts in the same jaw. Postoperatively, CBCT image was superimposed on the preplanned drill path and imported to the DICOM file.

Result: Average osteotomy sites for both the mandibles in experimental groups were 1.75 and 3.25 mm for the control group.

Conclusion: The grid-guided approach for apical access is more precise than the conventional technique. This study proved that the grid is a more conservative and effective aid in endodontic microsurgery.

Endodontic microsurgery was introduced in the 1990s and has been emerging over the years.1 Modern microsurgical endodontic treatments have shown success rates of 89% than traditional surgical procedures. The main advantage of modern surgical techniques is the use of dental operating microscopes for surgical interventions.2 The appropriate magnification and illumination in microsurgical endodontics help in easy identification of the root apices resulting in minimal osteotomies and shallower resection angles, identification of fine anatomic details such as isthmi, lateral canals, canal fins, and microfractures of the resected root before root-end preparation with microsurgical tips and root-end fillings.3

Besides improved magnification emphasizing accurate identification and location of resecting the involved apex, surgical access is challenging in the case of mandibular molars where the root end is hidden behind thick buccal bone; hence, other treatment options such as extraction or intentional replantation are mostly preferred.3

High-resolution CBCT images, restricted field of view (FOV), and small voxel sizes allow dentists to see the whole length of the root canal. The diagnostic efficacy of CBCT has been proved in the evaluation of complex dental diseases, deformed teeth, causes extension, differentiation of periapical diseases, and external and internal root resorption. In apical surgery, CBCT images help to determine the size, location, extent of the periapical lesion, and mandibular roots to the inferior alveolar canal and buccal bone dimensions.4

In this pilot study, preoperative CBCT images were taken with prefabricated grids to locate the periapical pathosis in mandibular molars.

Roots from the mandibles of two adult human cadavers (Kilpauk Government College and Hospital, Tamil Nadu) in which mandibular first permanent molars were selected for this study (Fig. 1A). Preoperative radiographs were taken to confirm the absence of periapical pathologies. In both mandibles, grid-based CBCT planning was used for the experimental group, while nonguided CBCT planning was used for contralateral counterparts in the same jaw (Fig. 1B).

A stainless steel grid has been precisely created (Vijaya Lakshmi Pvt. Ltd, Guindy Chennai). The length is 32 mm and the width is 42 mm. Each grid box is 4 × 4 mm in size, with a [R] reference dot in the center (Fig. 2A). To support the grid, it was positioned along the long axis of teeth on the lingual side by using putty material (Zhermack Zetaplus, Italy) (Fig. 2B). 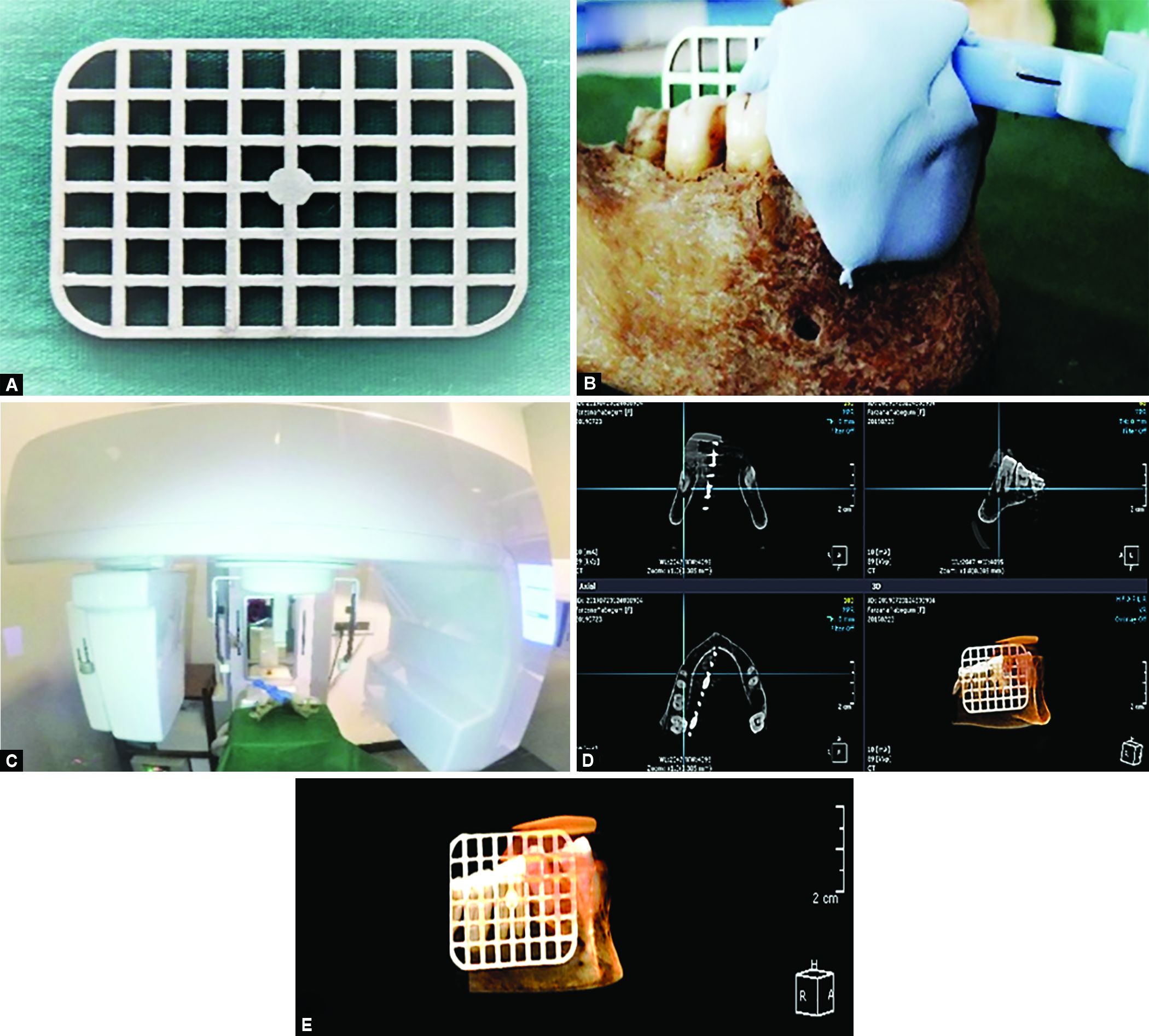 Figs 2A to E: (A) Custom-made grid, R—reference in the center; (B) Grid placed on the long axis of teeth along with putty material; (C) CBCT unit along mandible was positioned; (D) Preoperative CBCT radiograph; and (E) Postoperative CBCT

A Cranex 3D Acteon CBCT unit (X-Mind Trium, Italy) with a 4 × 6 cm field of view and a 0.076-mm voxel size was used to capture preoperative CBCT images of the teeth. The settings were 89 kVp and 10 mA, with a 10.8 -second exposure time. In the experimental group, the bitewing holder along with the grid was positioned on the teeth. Cone-beam computed tomography (CBCT) image imported to STL file (Figs 2C to E).

In the experimental group, the grid was placed along with a bitewing holder, and preoperative CBCT was taken, in which bur intersected the surgical grid was recorded. The control group was set perpendicular to the long axis of the tooth, with the identical target point of the bur without a grid. The preoperative X-ray was used to determine the bur entry location in the control group.

Surgical round carbide bur of size 0.2 (SS White) was placed perpendicular to the surgical grid at the predetermined bur entrance point in the experimental group using a high-speed handpiece (NSK FX22), and the goal was to resect the entire root end. A premeasured endodontic file was placed over the tooth in the control group to find the bur entrance point relative to the cementoenamel junction. The bur was positioned perpendicular to the tooth’s long axis and inserted into the bone at the predetermined bur entry depth. The entire procedure was carried out by a single investigator. Throughout the drilling process, a mild pecking motion was used with water irrigation.

Microsurgery is a surgical procedure performed under an operating microscope on extremely small and complex structures. The microscope allows the surgeon to precisely diagnose and eliminated the pathological lesions, thus resulting in less tissue damage during surgery.6 Endodontic microsurgery and nonsurgical retreatment had similar success rates, accounting for 92 and 80% of the total pooled success rates, respectively. The success rate of the microsurgery group was much higher than that of the retreatment group.7 Based on the literature search, the microsurgery group had a significantly greater success rate in the short-term follow-up (less than 4 years), but no significant difference was observed in the long-term follow-up (more than 4 years).8 As a result, roughly 10% of all periapical lesions require surgical intervention in addition to endodontic therapy from a pathological standpoint.9

Studies have shown that the rate of healing has a direct relationship with the size of the osteotomy. The smaller the osteotomy, the faster the healing rate.10 Von et al. found that the lesion smaller than 5 mm takes on average 6 months to heal, where the lesion 6–10 mm takes 7 months, and a lesion greater than 10 mm takes 11 months. As a result, the osteotomy should be as minimal as possible while still being large enough to achieve the clinical success.11

During surgery, there is a tendency to widen the osteotomy toward the coronal margin, away from the apex. The osteotomy is significantly smaller with microsurgical techniques, measuring only 3–4 mm in diameter.12 To eliminate 98% of the apical ramifications and 93% of the lateral canals, at least 3 mm of the root-end must be removed.13

The advantage of using a grid was to identify the apex precisely during surgery. Iatrogenic injury to adjacent roots and anatomical tissue includes mental nerve and maxillary sinus.14 Guided access helps to conserve the cortical bone to reduce the size of the osteotomy and improve the healing process.

In the medical field, CBCT pictures obtained with a prefabricated grid have been used to determine the entry point for interventional operations like biopsies and drainage.15

The residual height of the buccal bone plate and the length of the access window have been found to impact the prognosis of surgically treated patients. As a result, guided access might potentially improve the healing process by reducing the size of the osteotomy.16

Root access guided by prefabricated grids was shown to be more accurate than root access without guides in this pilot study. The control operations varied from the position was 3 mm and up to 3.5 mm because a 2-mm safe distance from anatomical landmark is usually regarded on the contrary experimental groups produced more reliable results.

The grid is 4 × 4 mm apart, and the entrance point’s precise location is predicted within a 4-mm window. When there is an undamaged bone and a periapical infection, the grid-guided approach was used to locate the exact point of entry of the bur. The grid may serve as a road map of the surgical site and help identify any matching location on the CBCT.

The grid is very reliable, accurate, economical, and cost-effective for the patient; less chair side timing with the patient is possible with it; and the size of the grid is as same as that of intraoral periapical radiograph (IOPA), can be easily sterilized, and used repeatedly.

Within the limitations of this study, it can be concluded that the grid-guided approach for apical access is more precise than the conventional technique. This study proved that the grid is an effective aid in planning for endodontic microsurgery. Its use also allowed a slight decrease in total operative time. To prove this, more large-scale clinical research is required.