Mandibular canines usually present with single root and root canal. Two canals were reported with incidence rate of 4–12%. Understanding these variations was of utmost importance for the successful endodontic treatment. Failure to do so can lead to patient coming back with sensitivity, persistent pain which ultimately leads to treatment failure. Present case report describes the endodontic management of a mandibular canine with Vertucci type III configuration.

Successful endodontic treatment requires an in-depth knowledge about the tooth anatomy, root canal morphology, and its possible variations. Failure to recognize the variations could lead to missed canals, which gives rise to postoperative pain and eventually endodontic treatment failure. Thus, to guarantee adequate treatment, one must pay attention to proper diagnosis, careful and thorough chemomechanical preparation, and good obturation of root canal system, which are key factors for an optimum treatment outcome.

Mandibular canine is a strategically important tooth in the dental arch as its long, stable root is useful for prosthetic support due to its proprioceptive properties that regulate or guide the masticatory function, combined with its role in occlusal guidance during the eccentric movements and posterior disocclusion. Thus, the preservation of this tooth is of utmost importance.1 Majority of the mandibular canine reported has a single root with single root canal. However, with the inception of new advanced technologies, such as magnification and radiological imaging systems, there has been an increase in the reported cases of morphological variations of teeth. The incidence of having a single root and root canal reported in literatures was 95.42,3 and 90.5%,4–6 respectively. Variations that were reported involve single root with two7 or three canals,8 two roots with two9 or three canals.10

A 38-year-old female patient with no relevant medical history reported to our outpatient department with a chief complaint of pain in relation to her lower right mandibular canine (43). Her pain aggravated on having cold and hot fluids and relieved on its own. On clinical examination, the tooth had attrition and tenderness on vertical percussion. Electric pulp testing showed early response, and cold testing revealed severe pain, which lingered for 10 seconds. Preoperative radiograph (Fig. 1) was taken, which revealed single canal which emerges from pulp chamber and disappears in the coronal third of root canal indicating bifurcation. A clinical diagnosis of symptomatic irreversible pulpitis was established, and root canal treatment was advised. 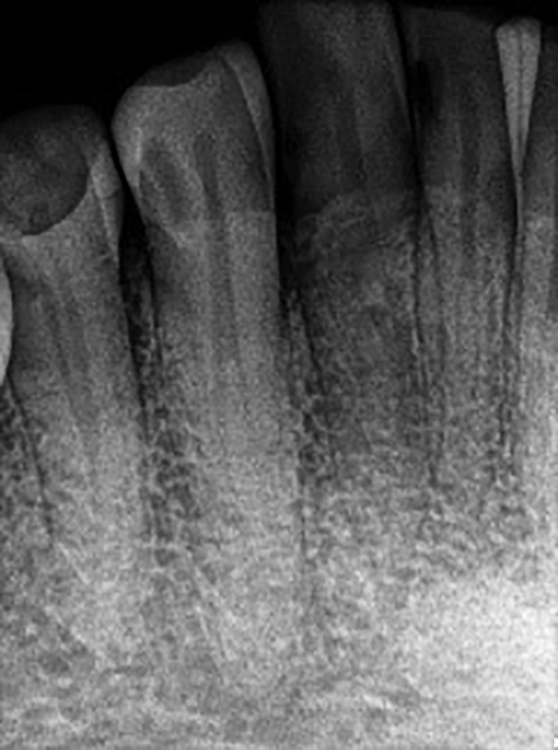 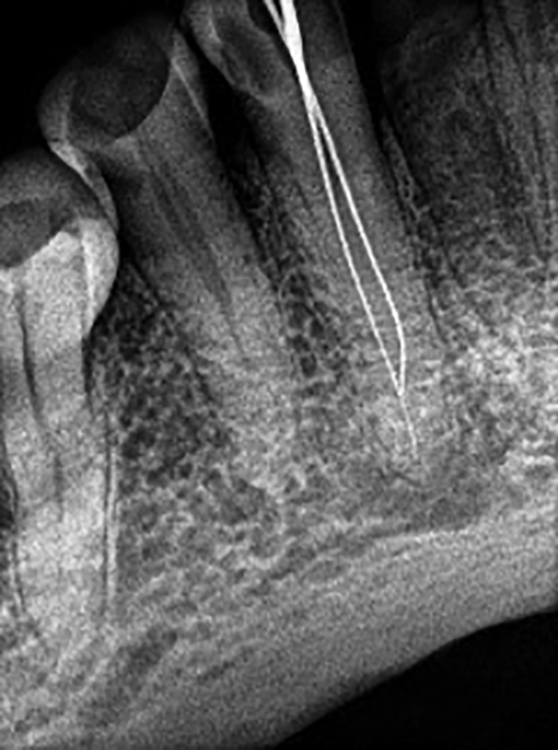 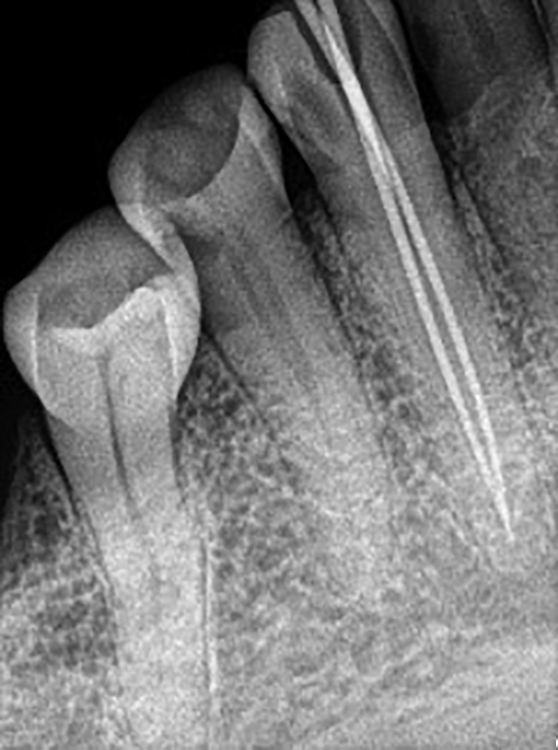 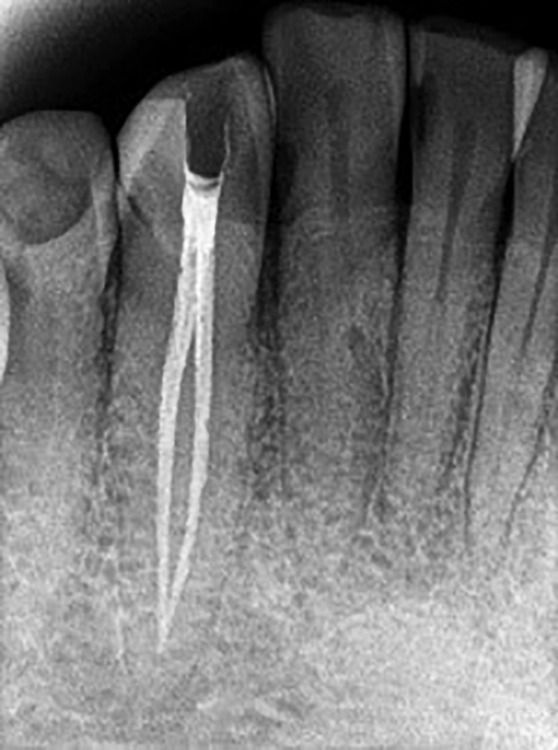 Mandibular canines usually present with a single root and root canal system. Anatomical variations are sometimes missed when clinicians were not aware of the morphological variations that can occur in these teeth. Therefore, it is crucial to carefully inspect the diagnostic radiographs and be aware of the importance of detection of a sudden loss in the continuity of the root canal or a radiolucent groove in the lateral part of the root, which indicates the presence of more than one canal. Thus, acquiring an angled radiograph (20–25° or Clark technique) facilitates the detection of extra canals.1 Thus, one should modify access cavity preparation accordingly and explore to look for additional canals.

Mandibular canine with variations possesses technical difficulties during instrumentations. There is high chance for complications like blockage, ledge formation, instrument separation, lateral perforation if instrumented with large size files in such cases. Therefore, meticulous care should be taken during biomechanical preparation with copious irrigation with sodium hypochlorite and 17% EDTA solution is mandatory.

Taking consideration from different studies reported, variations in mandibular canine are not a common finding, but the dentist should always be knowledgeable about anatomical diversities before endodontically treating any tooth. This case report highlights the importance of exploration during endodontic treatment of mandibular canines. When in doubt, additional imaging techniques like Clark’s tube shift techniques and cone-beam computed tomography (CBCT) should be utilized.

Mandibular canine with variations can possess challenge to clinicians. Careful assessment of preoperative radiographs is mandatory for identifying deviation in canal and root anatomy, and one should not assume it to be easy to treat. A simple tooth can be the most difficult to manage if clinicians are not knowledgeable about anatomic variation and root canal complexities.